Ozone therapy is a form of alternative medicine treatment that purports to increase the amount of oxygen in the body through the introduction of ozone.

Ozone (O3) gas discovered in the mid-nineteenth century is a molecule consisting of three atoms of oxygen in a dynamically unstable structure due to the presence of mesomeric states. Although O3 has dangerous effects, yet researchers believe it has many therapeutic effects. Ozone therapy has been utilized and heavily studied for more than a century. Its effects are proven, consistent, safe and with minimal and preventable side effects. Medical O3 is used to disinfect and treat disease. Mechanism of actions is by inactivation of bacteria, viruses, fungi, yeast and protozoa, stimulation of oxygen metabolism, activation of the immune system. Medication forms in a gaseous state are somewhat unusual, and it is for this reason that special application techniques have had to be developed for the safe use of O3. In local applications as in the treatment of external wounds, its application in the form of a transcutaneous O3 gas bath has established itself as being the most practical and useful method, for example at low (sub-atmospheric) pressure in a closed system guaranteeing no escape of O3 into the surrounding air. Diseases treated are infected wounds, circulatory disorders, geriatric conditions, macular degeneration, viral diseases, rheumatism/arthritis, cancer, SARS and AIDS. 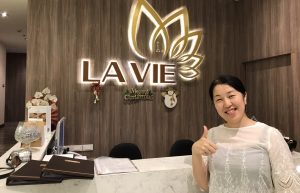 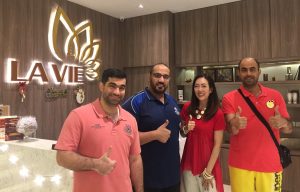 Happy customers from Dubai after a massage, colon hydrotherapy and IV treatments

“Located in the heart of Bangkok with excellent service and offers a well rounded variety of health and wellness care.”

“I had 2 treatments of Placenta and feel great. The service was amazing.”

“I had a colonic hydrotherapy here. It?s very clean and not painful at all. The therapist here is very professional and knowledgeable. The bloating in my tummy has gone after the session. I will definitely come back again for the next round!!! I strongly recommend this place to my friends for their health and wellness care.”

“I love this place so much especially vitamin and detox therapy. it’s divineee.”

“High level wellness at here and I enjoy for detox & treatments program so much.”

“Lavie was truly an amazing find especially?after a 20 hour flight from Los Angeles. The facility was decorated beautifully. Staff was helpful and welcoming.?My?facial room was spacious with dim light and the atmosphere?was just so relaxing. The therapist was definitely?gifted. My face felt amazing! My skin was much improved right after. Thank you Lavie !”

Lavie was truly an amazing find !